The United Kingdom recently published the results of an important consultation by the HM Treasury on proposed updates to the nation’s anti-money laundering (AML) and counter-terrorism financing (CTF) regulations, including the Crypto Travel Rule, which is likely to come into effect in September 2023.

The consultation will probably receive the approval of lawmakers, and most of the measures are said to be likely to appear in the final version. In addition to the Travel Rule, these include regulations to do with data privacy, the definition of an intermediary, and other matters of concern to virtual asset service providers (VASPs).

What Is the FATF Travel Rule?

The Crypto Travel Rule is shorthand for the Financial Action Task Force’s (FATF) update to its Travel Rule (Recommendation 16), which states that VASPs must share originator and beneficiary data with each other during crypto transactions that cross the threshold of $1,000. The rule also applies to transactions that occur between a VASP and a bank. Other requirements include personally identifiable information (PII) such as names, addresses, and account numbers.

Given that FATF is an intergovernmental body, it can only make recommendations to its member states. However, these are generally followed, as nations wish to stay on the good side of the organization so as to remain whitelisted in the global financial system.

The Travel Rule has been slow to implement since FATF’s 2019 recommendation first took effect, with the diverse group of nations following different timelines and using a wide range of monetary thresholds. The struggle to manage the Crypto Travel Rule across many jurisdictions is referred to as the “sunrise problem.”

What is the UK’s Travel Rule?

As of now, it appears that the country plans to hew very close to FATF’s recommendation. The consultation agreed to adopt FATF’s terms of “originator” and “beneficiary,” saying that the standard terminology of “payer” and “payee” is unsuited to crypto.

There was apparently some disagreement among the participants as to how long the grace period for compliance with the Crypto Travel Rule should be, with some saying as long as 20 months and saying as short as six. In the end, the date they agreed on was September 23, 2023, which gives VASPs over a year to get their houses into order.

With regard to data privacy, the consultation did not want to be out of step with FATF, and so they agreed that all of the originator and beneficiary data collection stipulated by Recommendation 16 should be followed. However, they said that such PII data should be exchanged off-chain in the case of cross-border transactions, while for transactions between VASPs based inside the UK, there won’t be a requirement to share data.

Regarding what kinds of businesses are obligated to collect Crypto Travel Rule data, the consultation said that the term “intermediary” was too broad and should only apply to crypto-asset exchanges as well as third-party custodial wallet providers. Other kinds of entities such as software developers do not need to engage with these regulations. In the case of unhosted wallets, data collection will be mandated in situations where there is a “high risk” of illicit fund movements.

As for the monetary threshold, the government has opted to measure it in euros, with the number set at 1,000 EUR.

Nations around the world are hurrying to get into compliance with FATF’s Crypto Travel Rule. Despite two previous 12-month reviews by FATF, the progress has been a slow affair. The onus is now on countries and their VASPs to overcome issues such as the “sunrise problem” (where different jurisdictions are in various stages of Travel Rule rollouts). With many billions in illicit crypto flows happening every year – and with crypto money laundering squarely in the sights of regulators and law enforcement – governments see themselves as in a race with a sophisticated and new form of criminality they are eager to combat.

While VASPS will largely bear the costs of implementation, once something resembling the global implementation of Recommendation 16 has been achieved, it’s likely that greater institutional investment will flow into the crypto space, benefiting all parties in the long run.

Sygna is here to help VASPs and other institutions with comprehensive solutions to the regulatory challenges they face.

Learn more about Sygna Hub, our new modular AML compliance platform that features Sygna Bridge, our first-to-market Travel Rule solution, as well as several integrated market-leading AML services from providers such as Chainalysis and Elliptic. We also have Sygna Gate, a browser-based version of Hub for smaller VASPs, which is automated and requires no integration. Get in touch with our team at [email protected] to learn more. 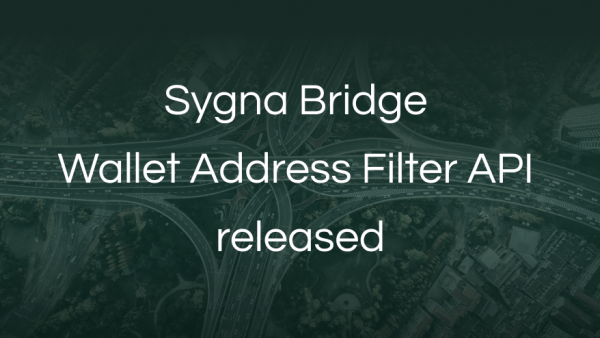